Last night (Weds 5th Sept) ITV1 aired a one off special programme in which members of the Coronation Street cast explored their histories through the means of DNA research. Following on from the huge success of ‘Long Lost Family’ we were treated to the actors submitting their DNA to an increasingly popular DNA testing site, with some very interesting results. Radio Times called the show “…a mash-up of Who Do You Think You Are? and Long Lost Family with a Corrie twist. Think of it as Who the ’Eck Do You Think You’ve Lost?” You can watch the episode on ITV Hub – Click Here.

Ariel Bruce and her team regularly use DNA to trace family members, investigate DNA links and to contact possible relatives. You can expect DNA testing to feature much more in the national conscience in the next few years.

Following in the footsteps of the Corrie stars, potential DNA testers can submit a saliva sample to any of the DNA testing sites by post and then create an online account to access their results. On the website you can see your DNA matches, build a family tree and contact potential relatives. It’s amazing what DNA investigation can unearth, as we found out during the show, as Corrie stars & long term friends Sally Ann Matthews & Amanda Barrie turned out to be cousins! Cast member Liam Bairstow also found out that he was related to King Edward I of England.

With #CoronationStreetDNA trending around the country last night, it is clear the nation was enthralled by the programme. Many took to Twitter to express their joy at during the shoe, with lots having more questions about the DNA aspect. Is the UK just waking up to the possibilities unlocked by DNA testing? 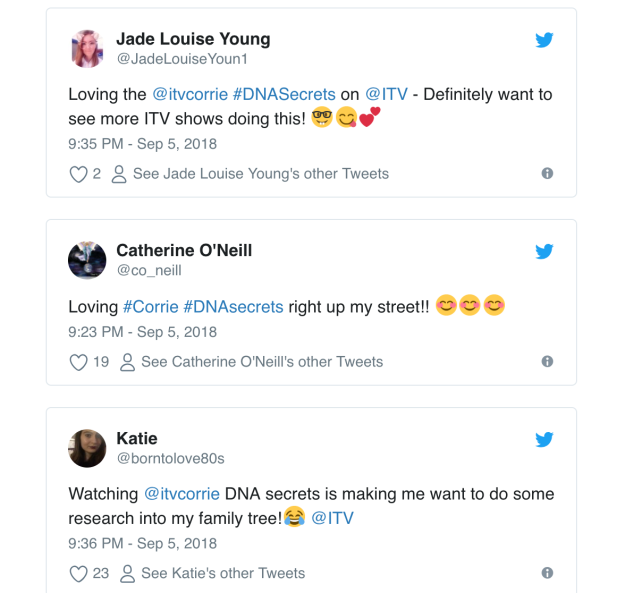 Either way the use of DNA to create tense and emotional viewing is just beginning. With a new series of Long Lost Family in the pipeline, and other DNA related programmes too, you can certainly expect more.

Monday 25th February 2019 saw the release of a one off special of the ‘Long Lost Family’ franchise: ‘Born Without Trace’. Ariel Bruce and her team, Julia Bell and Charlotte Bruce Lloyd, worked tirelessly for many months alongside the producers Wall to Wall Media and presenters Davina McCall and Nicky Campbell to bring this ’emotional […]