Ariel and the team are very pleased to announce that the new series of Long Lost Family (Series 10) will be airing Monday 18th January at 9pm on ITV!

Ariel would like to send a special thanks to Davina McCall, Nicky Campbell, Sally Benton, Clare Bradbury, and the team – who have all worked so hard, and without whom this series would not have been possible – Charlotte Bruce-Lloyd, Louise Baldock, Sally Berman, Cheryl Oliver and Andrew Bayliss. 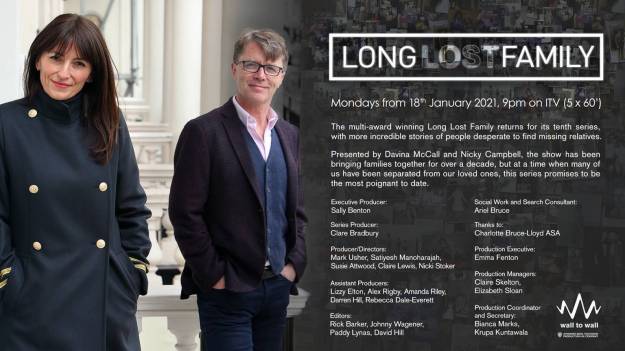 Ariel and her team are very pleased to announce a two-part special of Long Lost Family: Born Without Trace will be airing Monday 1st & Tuesday 2nd June on ITV.

Join @ThisIsDavina and @NIckyAACampbell in a two-part special reuniting foundlings.

Ariel and her team are currently working hard on Long Lost Family Series 10. The forthcoming Series 10 will air later this year.

Since 2011 Ariel has worked as the consultant social work and research lead on the highly successful and award-winning series ‘Long Lost Family‘ for ITV1. In this series, separated family members are successfully traced and reunited by Ariel who provides appropriate professional support.

Further information on this series can be found on the ITV website: Long Lost Family

Ariel acted as the series search consultant and undertook the tracing work for BBC One Series called The Gift. The Gift is a series that traces and reunites people who have shared an often important life changing experience. Made by W2W, who also make Who Do You Think You Are and Long Lost Family. Ariel was very pleased to have been able to work on this series. The first episode was broadcast on Tuesday 10th February 2016. 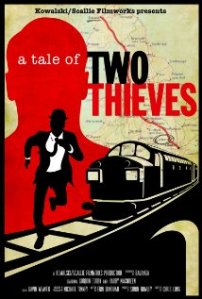 A film documentary, A Tale of Two Thieves, released in 2014, claims to solve one of the Great Train Robbery mysteries that dogged investigators at the time – the identity of the infamous “Ulsterman”, credited with being the inside man at the Royal Mail. The film-makers employed Ariel Bruce to identify him. She is extensively interviewed as part of the film  ,  See The Great Train Robber unmasked: The Irish Independent, 5th October 2014. And also Great Train Robbery cash was passed on to Catholic church, claims film’, Duncan Campbell, The Guardian 2nd September 2014.

Previously, Ariel’s work has featured in a number of television documentaries including ‘Relative Strangers‘ (Channel 4, 1991), in which two of her searches were followed from start to finish, ‘Forgotten Mothers‘ (Channel 4, 1997), ‘Looking for My Mum‘, (Channel 4, 2001) and ‘Looking for Dad‘ (Channel 4, 2003). Many of these documentaries have been broadcast around the world. She has also been a guest on various television and radio programmes including ‘This Morning‘ (ITV1) and ‘Women’s Hour‘ (BBC Radio 4). Ariel has also undertaken searches and acted as a consultant  for documentary makers including Polly Bide, Bob Woffinden and Nick Broomfield.

Ariel was the research consultant on the Channel 4 documentary ‘The Homecoming‘. Read about it in the Telegraph and Community Care

In 2001 Ariel worked as a consultant on Daisy Asquith’s documentary series ‘Fifteen’ for Windfall Films. Ariel helped Asquith to reunite one of the three protagonist’s with their birth mother, and facilitated a meeting for the documentary.

An interview with Daisy Asquith can be read here (Click Link)

Hanratty: The Mystery of Deadman’s Hill

Ariel worked as a researcher on this “True Stories” programme, produced by Bob Woofinden for Channel 4.

On 14th March 2020, the Overseas Plastic Surgery Appeal (OPSA) raised £50,000 at the OPSA ‘Behind a Smile’ Charity Fundraising Evening. The event was a tremendous success and attended by many wonderful advocates of the life-changing surgery provided by OPSA. The facial surgery enabled through OPSA continues to transform the lives of many babies and […]